by Jayne at Nom Nom 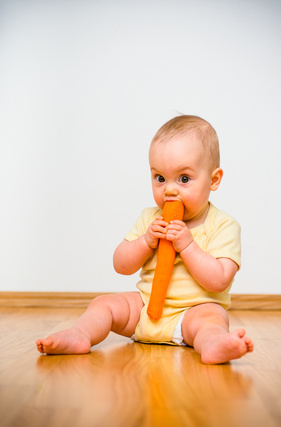 News came this morning that we should be eating at least seven portions of fruit and vegetables a day rather than the previously recommended five.

My husband, who has always been rather fruit and veg averse, tried to convince me it was the April Fool’s feature and the real news is that bacon is good for you! He is convinced his limited repertoire in childhood, basically carrots and peas, has informed his not much wider selection in adulthood. Considering the evidence of many studies regarding food choices I am inclined to agree.

So how do you influence your child to embrace this part of the diet, so essential for good health, and to say “nom nom” rather than “yuk” when faced with the green stuff?

The foundations can be laid down as early as during pregnancy. Evidence suggests that exposure to flavours in the maternal diet via the amniotic fluid can affect a baby’s later acceptance of solid foods. One study “examined the influence of repeated prenatal exposure to carrot juice and found that women who consumed carrot juice for three consecutive weeks during their third trimester of pregnancy had infants who exhibited fewer negative facial expressions when first introduced to carrot-flavoured cereal as compared to plain cereal”*

The early years are key in influencing future healthy eating behaviour so start at weaning as you mean to go on. Pureed fruit and vegetables or cooked wedges, if taking the baby led route, are usually the first foods on the menu. We can capitalise on this time by including a large selection and varying the taste and texture of what is on offer by including sweet, tart, savoury, soft, firm and lumpy to extend the palate and encourage a lifelong love of this important foodstuff.

Be persistent. If your baby or child dislikes a vegetable don’t discount it. Studies have shown that repeated offering of a food usually leads to its acceptance …basically children learn to like what they’re given. I’m not talking force feeding here just gentle persuasion. This is even more relevant during the toddler stage when even a previously adventurous child can become a fussy eater. Foster the expectation that they will always try a small amount, reward them with praise for giving it a go and focus on the positive (those they will eat) rather than the negative (those they reject). Serve up it up in another guise. If they don’t like tomatoes, try cherry tomatoes or a tomato sauce and do likewise for other fruit and veg. There will usually be one form your child will find acceptable.

Be involved. Anything which includes your child in the choosing, cooking and even growing of food (try some pots of herbs, salad cress or tomato plants) will help to overcome resistance. Lead by example, you are their biggest role model and if you are eating fruit rather than crisps or biscuits they are more likely to follow suit. Make food a social occasion by trying to eat together as a family whenever possible and turn fruit and vegetable eating into a game, using a chart to reach their target and providing a (non-food based) reward at the end.

If the carrot approach fails you may need to employ some subterfuge using clever tricks to smuggle in fruit and vegetables. Try hiding vegetables such as peppers, celery, onion and courgette in a tomato base by cooking and then whizzing together to create a smooth sauce. Blend vegetables into a tasty soup. Even the much maligned brussel sprout can be sneaked into a bubble and squeak. Try vegetable juices, (sweet tasting carrot is usually popular for its taste and vivid colour and can be mixed with smaller amounts of beetroot, celery and apple) and transform fruit by making a puree and freezing into an ice lolly.

With the teenage stage comes the lure of junk food and peer pressure. A hurried bowl of cereal and the fast food counter at school can mean you are tasked with providing the majority of their seven a day in the few remaining hours before bedtime. Make it easier for them to include fruit and veg by providing convenient healthy choices they can help themselves to – smoothies, bars based on nuts and dried fruit, tubs of ready prepared fruit. And why not take advantage of mindless eating by providing bowls of raw carrots and celery sticks, grapes and apple wedges while they are sitting at the computer or watching TV.

And for my reluctant husband? – there’s always the BLT.

How do you make vegetables more appealing?

Jayne Russell has over twenty years of experience as a pre’ and postnatal massage and nutritional therapist and is the founder of Nom Nom – award winning, certified organic pregnancy and baby skincare. Sign up for your free skincare guide “10 Steps to Super Healthy Baby Skin” at nomnomskincare.com